Skip to content
You can’t count on the police to protect you because they really don’t care.  Their help is provided based on how they view you.  They don’t check on complaints or whether an individual is making up a story.  Look at the police blotter and count how many times it states “responded”, most are incidents “reported”.  The reported are then included in all the new files opened in the last year and then they can ask for more officers/money.
My lawyer suggested taking the following email to the police. What’s the point?  It originated from a former RCMP!  I’d be laughed out of the station!
Everyone knows the cops cover for each other, in my opinion.
You don’t really know what your ‘friends’ are doing secretly, do you?  Fine upstanding citizens spewing secretly – bet they wouldn’t say shit if they had a mouthful in public.  Can’t let anyone see the ‘real’ person.

By the way, I do not know this person, have never met her, only seen her picture in the papers. http://www.comoxvalleyrecord.com/sports/182429901.html  Have no idea why this individual wants me dead, or why the writer states:  “Will likely make you mad though.”   What did I do to her?
EDIT JANUARY 10, 2013
I originally posted the entire email, but Mr. de Jersey objected so this is the section of the email which I wanted highlighted anyway.
This is the edited version: 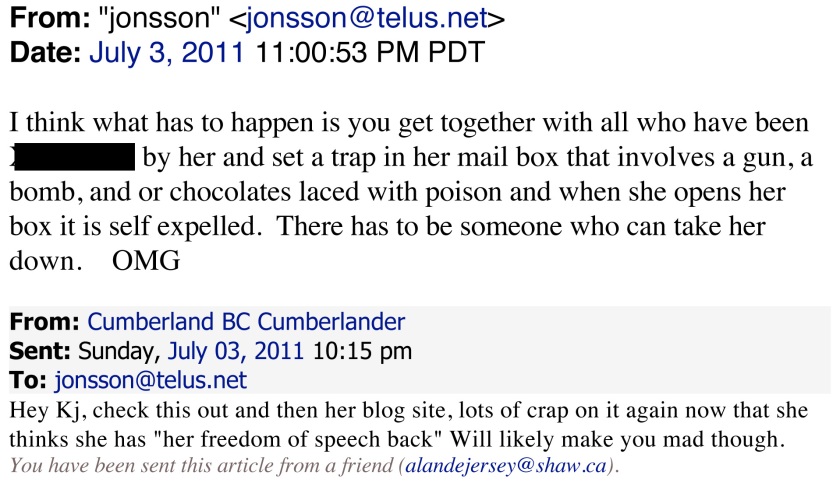