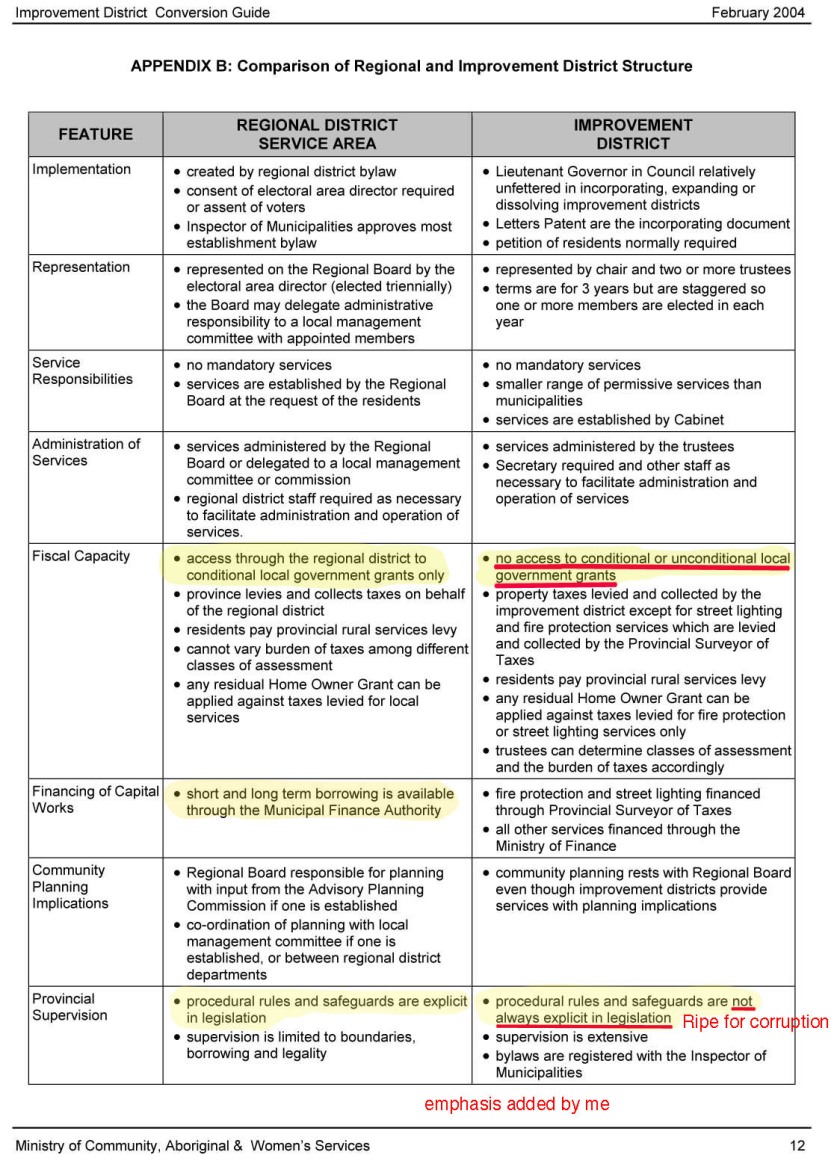 “Staff at the UBID office could not comment publicly, saying the organization’s bylaws dictate the chair is the only person who can comment, but they did confirm there is no chair at this time.” (emphasis added by me).

“At one point, someone tells Healey to get control of the meeting.” Gee who could that be?

“The topic of violence at meetings returns at the end of the discussion before the camera is shut off, prior to any adjournment.” See – there was no motion to adjourn. One trustee decides to have the camera turned off and that’s the end of the meeting.

Next meeting for board is scheduled for Oct. 17

The Union Bay Improvement District’s board is missing a chairperson.

The Comox Valley Record received a tip that new chair Paul Healey stepped down at a meeting on Tuesday, Sept. 24.

Staff at the UBID office could not comment publicly, saying the organization’s bylaws dictate the chair is the only person who can comment, but they did confirm there is no chair at this time.

The newspaper has not been able to confirm whether it was Healey’s choice or if he is still a board member. The Record has reached out to him for comment, but at the time the story went to press, had yet to hear back.

The UBID website includes video from the latest board meeting held Sept. 19. In it, Healey does refer to an upcoming committee meeting slated for the following Tuesday. The next actual board meeting is set for Oct. 14.

Almost from the outset the Sept. 19 meeting, a contentious debate breaks out between board members Susanna Kaljur and Rick Bitten over points of order and whether what they are discussing is even on the agenda.

A key issue is the absence of staff at the meetings because of concerns about violence. About six minutes in, Healey tells everyone to stop. The disruption continues through for until about the 10-minute mark. Board members start to discuss recent business such as water treatment and computer equipment for the fire department. Around 20 minutes in though, the discussion breaks down into more arguing, with members returning to issues around points of order and the agenda. At one point, someone tells Healey to get control of the meeting.

“Everybody, try to be respectful,” Healey tells them. “We had a good meeting on Aug. 8. If we can have a meeting the same way, that would be perfect.”

The topic of violence at meetings returns at the end of the discussion before the camera is shut off, prior to any adjournment.

On Aug. 9, Healey wrote the Ministry of Municipal Affairs requesting a study of board governance. UBID posted a response on its website from Marijke Edmondson, director of Governance Structures, about a possible incorporation study.

“Incorporation can be a contentious issue for a community in the best of circumstances. Over the past two years there is already evidence of significant community discord in Union Bay, given the governance challenges the Board has had and the contentious interactions that have occurred between the Board and members of the public,” she states, adding that before any study can take place, the Comox Valley Regional District and the electoral area director will need to take a leadership role in the process.

You might want to skip to the last few minutes to see how a certain trustee loses it and takes over the meeting with the Chair parroting his instructions after jumping to his feet.

The gong show continues. Tues. the board was planning a by election obviously for Paul Healey’s position as he must have quit since he was the only one absent from the COW meeting. Now we hear he has ‘unquit’ ‘unresigned’? Of course nothing was posted on UBID’s website as they see no reason for landowners to be aware of what the hell is going on.

The problems are not going to be fixed by a different Chair! We have a majority of trustees and admin who are ignorant of the FOIPPA and Robert’s Rules. So how the hell is it ever going to improve? They just keep bumbling along continuing the same mistakes. Imagine that – a local government admin being ignorant of the FOIPPA! And, because the majority of trustees aren’t interested, this little government office blatantly violates the FOIPPA. Just ask them to explain why they believe anything to do with employees falls under ‘in camera’.

Do these guys even watch the videos or do they simply rely on their faulty memories and inflated egos? Since when did one of the trustees become a legal expert about lawsuits?

Why does the video guy sit so far back from the board? The farther he is away the more difficult it is to hear what’s being said. Has anyone instructed him to sit closer?

Where’s the video of the Sept. 19, 2019 meeting? Big deal – they only managed to post a meeting video once within 24 hours. Looks like that was just a fluke. This is the video to see what happened at the end. Let’s all see what this trustee actually did.

This audio excerpt of the Sept. 19, 2019 after one of the trustees kept insisting there is violence at the UBID meetings and that Mosaic (logging company) will not attend public meetings due to the violence.

I ask him to provide examples of this violence. He loves to hear himself talk so he launches into a speech about meetings being disruptive, disrespectful, etc. – NO VIOLENCE. Absolute bullshit on and on.

You will note the Chair states to Trustee Kaljur “last point” at which time she responds to the claims made by a trustee who was not present at the Apr. 23, 2019 meeting. At this point the same trustee, who just finished his loooonnnngg speech about UBID meetings not being run properly, interrupts without the Chair’s permission and speaking over Kaljur, refusing to allow Trustee Kaljur to continue and then declares that the video camera be turned off because they are “gonna get sued”. The Chair stands up suddenly and his chair goes flying to the floor behind him. The meeting ends with this version of yelling ‘fire’ in a crowded room.

It would be funny if it wasn’t so telling. The very person claiming the meetings are not being run properly just caused a panic in the room because he didn’t want Trustee Kaljur to finish her point.

He was not recognized by the Chair – how is he going to spin that one? The creator of the Gong Show continues claiming everyone else is to blame.

Attended the UBID COW meeting at 9 am and the trustees discussed calling a by election but never stated Healey had quit.

Had to leave when they went ‘in camera’. This is the meeting where they are going to spend your money on staff. Will be interesting to see how much of an increase is given this year. Apparently, we will be notified at the Oct. 2019 Board meeting.

The gong show in Union Bay will continue until we are a service area of the CVRD. There has been no progress in the way the Improvement District is run since Oct. 2016. Trustees expecting to slip into the positions and carry on – the problem is the ‘carry on’ part. It’s no point in carrying on with the same mistakes every month.

There is so much wrong with this Improvement District – it can never be fixed by electing trustees who may have great intentions but are unaware of all the problems. UBID is not run as a small government because no one knows what they are doing.

I had hoped I could have asked the question about why we are paying double for Admin costs from 2017 to 2019. Never got the opportunity so I imagine we are in for another big increase.