This is a followup to https://allthingsunionbay.wordpress.com/2020/11/29/the-predator-developer-will-now-concentrate-on-area-a-director-spider-to-the-fly/

This is an excerpt from the Oct. 22, 2020 Union Bay Improvement District meeting where the cost of hauling the sludge is discussed and what can be utilized on the four acres the water treatment is built on.

Water Supt. states there is no room on the existing 4 acres to have a settling pond and even if there were, the sludge would eventually have to be hauled away. States the Cumberland dump told him they don’t take sludge but says he knows they do. ???

BTW – if you watch the meeting posted on UBID’s site, there is no sound for the first 24 minutes without any notice to the viewer. Apparently, that section was ‘in camera’.

The developer claimed 5 acres was too small in 2012.

Page from KIP’s consultants, Focus. Note where they identified the water treatment plant should go.

This UBID meeting in March 2016 is when Peter Jacques attempted a “vote of no confidence” to prevent the board from purchasing the 20 acres close to Langley Lake (the very piece of land identified by KIP’s consultants) for the water treatment plant. Jacques advises he is aware of another plot of land available at no cost to UBID. Clearly, the developer was manipulating and conning landowners who never questioned what was spewed. The Molstad board was professional and that’s why the developer had to get rid of them.

Why did he change his mind in 2016? How did 4 acres suddenly become the perfect size?

NOTE what the developer states: “Should the UBID Board choose to abandon the proposed Island Timberlands purchase and place the expanded and permanent site on a 4 acre KIP parcel at the top of McLeod Road…” The developer eventually got his way once his flunkies were elected.

This took place after Jacques and Loxam were elected in April 2016 and who went behind the backs of the 3 remaining trustees and negotiated this ‘deal’ and then presented it to the board. This developer has been running UBID not to the benefit of landowners. 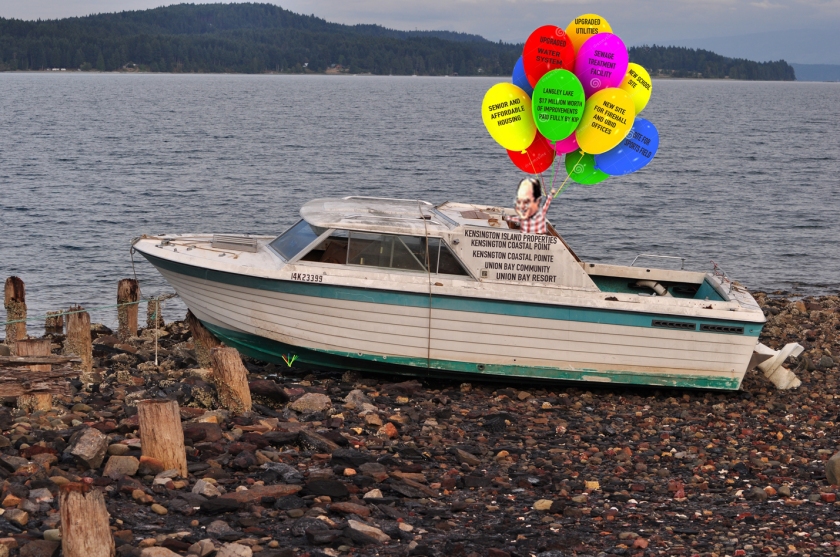 The rot took hold with this developer 15 years ago along with the fake Union Bay Residents’ Association and has spread year after year dividing and destroying this community. In Union Bay you can only be friends with those deemed acceptable by your neighbours. Don’t have an independent thought and above all, don’t express it. Thuggish behaviour has become the norm.

This developer has been running the Union Bay Improvement District since 2005 through Sept. 2020 with the exception from April 2011 to July 2016 when we had 5 trustees working for all the landowners and not kowtowing to this developer. This developer spread falsehoods and turned the community against that board because they wouldn’t buckle under his pressure.

We can breathe a sigh of relief with the results of the referendum knowing our governance will now change. We still need to be informed – no one is claiming the CVRD is perfect – We can’t afford to be ignorant regarding issues with Union Bay and its future.

The developer knows now his flunky trustees and the landowner who claims not to be his “representative” have done all they can for him including negotiating the 2017 WIA which really gives Union Bay squat. Sure he gave 4 acres of land for the water treatment plant (yet his own consultants never identify any land within the development as suitable) at the same elevation as the existing waterworks. They negotiated DOWN on the agreed upon 4 acres for a new firehall. Great negotiators! I’d like to know how he came to the 4 acre figure since he had previously claimed 5 acres was too small. After all the promises over the years by this developer and that’s all they got in their “negotiations”? Do we have “soaker pits for the peat slurry” and are we paying trucking fees to haul the slurry away?

The Molstad board purchased the land the developer’s own consultants identified as the ideal location for the water treatment facility but for some reason the developer was opposed (which is contrary to his own statement in the last email exchange below “Phase 2 will see the new facility closer to the lake”) and offered the 4 acres at the same elevation as the old waterworks. His flunkies got on the board and sold “the ideal location” back to the original seller and instead built on 4 acres. The developer must have told them it was the right size and why would they ever question the bullshit being fed to them? What is going to happen in the future 20 40 years from now? Did they consider they may need a larger piece of land? Where will that leave future landowners – will they have to start from scratch and purchase land and build larger because we had ignorant manipulated people ignoring the future needs of Union Bay?

The developer favoured our current Area A Director when he ran for the position a couple of years ago. The developer didn’t want anyone who knew the history so his flunky trustees campaigned against a local who knew the entire history of this developer in Union Bay and campaigned for Arbour who has made positive statements about the Union Bay Estates development. Spider to the fly.

Kudos to Mike Chouinard for providing continuing coverage of important matters in Union Bay. We have been lucky the last few years with excellent local reporters who have gone on to bigger and better things.

Across from Argyle Road, just outside the heart of Union Bay, there’s a field, and facing drivers connecting to the Old Island Highway are two signs with conflicting messages,

To the left, the sign says, “Vote No to CVRD,” while the sign to the right offers a rebuttal, ”Vote Today. Vote CVRD Makes Sense.”

On Saturday, Nov. 28 then, Union Bay voters made their choice as to which message they supported, ultimately deciding to go a new direction. The question before voters was: “Are you in favour of dissolving the Union Bay Improvement District and converting to Comox Valley Regional District local service areas?”

Unofficial results as of Saturday night showed 418 Yes votes to 159 No votes, meaning about 72 per cent of 557 voters opted for change.

Voting at the Union Bay Community Hall on general voting day was described as “steady,” following a couple of days of advance voting earlier this month.

At issue for voters in the community south of Courtenay was whether to roll the three services of water, fire protection and streetlights into Comox Valley Regional District administrative jurisdiction, or to maintain the status quo of having the Union Bay Improvement District (UBID) board and staff oversee operations, though with recommendations to enhance current governance.

The referendum question marked the end of a period for the community to consider the future of its governance. This has included discussions with stakeholders, forums for voters and a report looking at the ramifications of converting the services to the regional district. The governance discussion itself followed more upheaval on the board in recent years, which has included court action and resignations of board members.

“In recent years, there have been a number of challenges to UBID’s governance model including multiple board trustee resignations resulting in a loss of quorum. Staff transitions have added to the challenges,” the conversion study states.

On Nov. 19, returning officer Peter Crawford released numbers from the two days of advanced voting, held on Nov. 10 and 17. Voters cast a total of 415 ballots prior to general voting day. The recent governance study report notes that UBID provides service to 690 properties and almost 800 ratepayers.

So what is the plan? The CVRD announces plans with KFN with no mention of Kensington Island Properties but KFN has no concerns about KIP’s plan of dumping 1875 cubic meters of treated sewage daily into Washer/Hart Creek from a system KIP SUPPOSEDLY plans on building. Shouldn’t they be working toward a system together?

Email below from Melanie Mamoser, BC Ministry of Environment, advising “…indigenous consultation phase of the review with no concerns expressed at this time”.

Anyone know who installed these pipes that lead to a metal box attached to the concrete railway support?