When you vote for the trustee positions you should be smart enough to know the difference between a “Gift” and a “Loan”.

In April 2011, these folks below told the community KIP was giving Union Bay a $1.7 Million Gift. 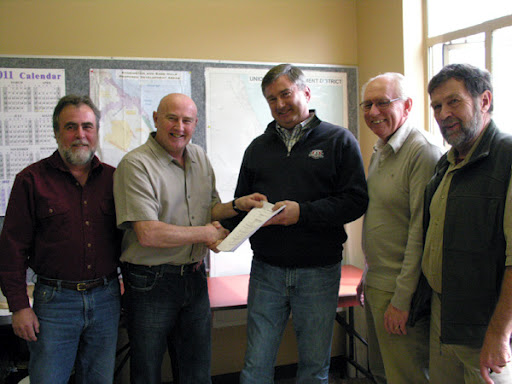 The Union Bay Improvement District and Kensington Island Properties have reached an agreement that will provide water treatment for the community south of Courtenay.
The UBID board of trustees ratified a Water Treatment Infrastructure Agreement Wednesday at its monthly meeting.
“We’re talking about a $1.4-million gift basically to Union Bay,” UBID chair Alan de Jersey said. “It is huge news for the community. It’s been a long time coming.”
Along with KIP, de Jersey credits UBID trustees Dave Godfrey and Denis Royer for making the water agreement happen.
“They were both very instrumental in getting this agreement done,” de Jersey said.
Godfrey and Royer have both announced they will seek re-election to another three-year term, to be decided at the UBID AGM next Saturday.
A freshwater treatment plant for water coming out of Langley Lake is part of Kensington’s plan to develop about 1,000 acres in Union Bay.
KIP vice-president Brian McMahon and the UBID will provide further details at a Monday press conference.
reporter@comoxvalleyrecord.com

FINALLY, THE TRUTH (figures have changed over the years from $1.7 Million to $1.2 Million)

“In essence, this would be an interest free loan to the community for however long it takes K.I.P. to recoup their investment.”

But that’s not what was presented when these folks collected all the signatures in support of Kensington is it?  Didn’t they say KIP would be paying for the water treatment plant?

What are the two new contenders for trustee campaigning on?  They don’t seem to know the difference between a “Gift” and a “Loan”.

Do you want to put the future of Union Bay in their hands?