Listen to the VP of Kensington Island Properties keep harping on about the expired Water Infrastructure Agreement.  He keeps talking about upgrading the existing system, a temporary one on KIP’s property.  Is he living under a rock?

He talks and doesn’t keep track of the bullshit spewed.  What good does it do to mention land for a permanent site when he has never put this in writing to UBID and when he insists on upgrading a temporary site on his land?  Why does he keep referring  to $1.2, $1.3 to upgrade the site and how that relates to 500 homes.  As I pointed out to VP of KIP at his meeting at $8,900. per lot is roughly 147 connections.

I don’t believe anything from this developer.  Too many bullshit stories and Union Bay is drowning in verbal promises.

How can people applaud this guy who talks big but never puts anything in writing?  The fools up here in Hillbilly Terrace think they’re getting the land behind their properties to the railway right of way.  One of them even tried to tell me Kensington had already given the land to them.

Our Board has wisely brought us beyond the empty promises we’ve all heard since this developer reared its head.   A temporary system is a waste of money, a bandage, a quick lay, etc., in exchange for control of our water.

For those who brought around the form below.  Shame, shame, shame. 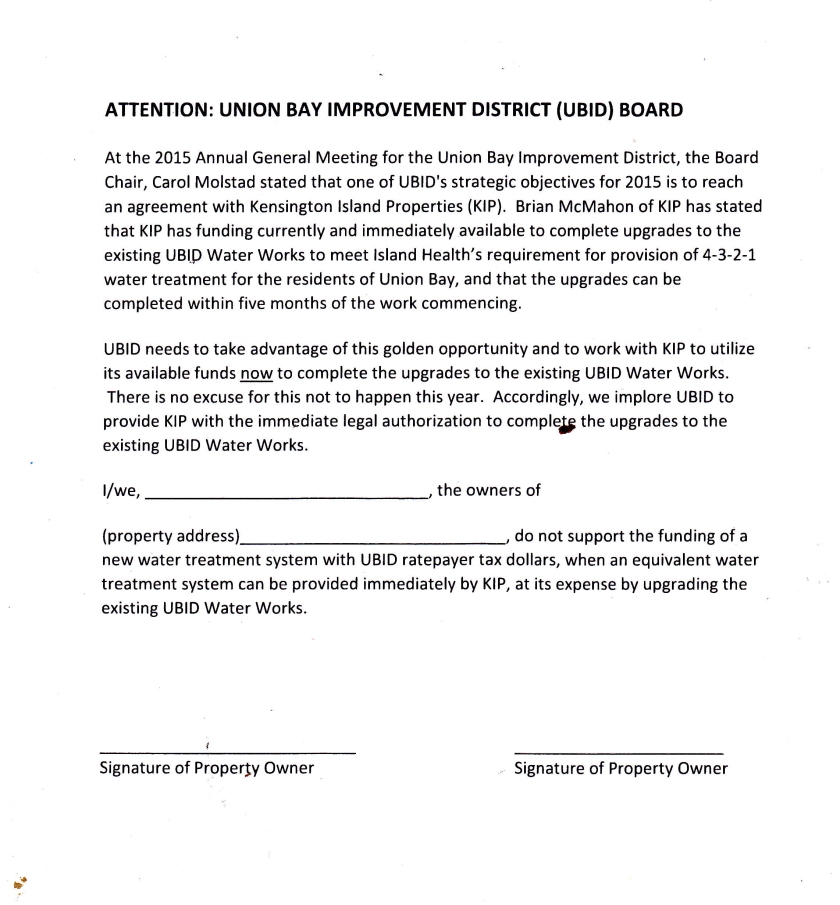 To continue to use the signatures gathered last June from a very misleading form as proof of support is laughable.

If I presented people with a form that asked:

“Do you want to retain control over your water source or are you willing to turn over control of your water for an upfront payment of Development Cost Charges which any developer is required to pay?”  The figures would reflect the wishes to retain control of our water.  Stop trying to pimp out the community for a lousy $1.2, $1.3 Million up front payment of Development Cost Charges.

It’s too bad we don’t have someone with investigative skills to root out where that “twisted” wording came from originally regarding the gift, interest free loan, upfront Development Cost Charges, confusion referenced in the signed document from the KIP candidates dated March 22, 2016.  It is certainly a mystery and no doubt a hard case to crack.  If only…………

Since people have twisted these words we will explain.