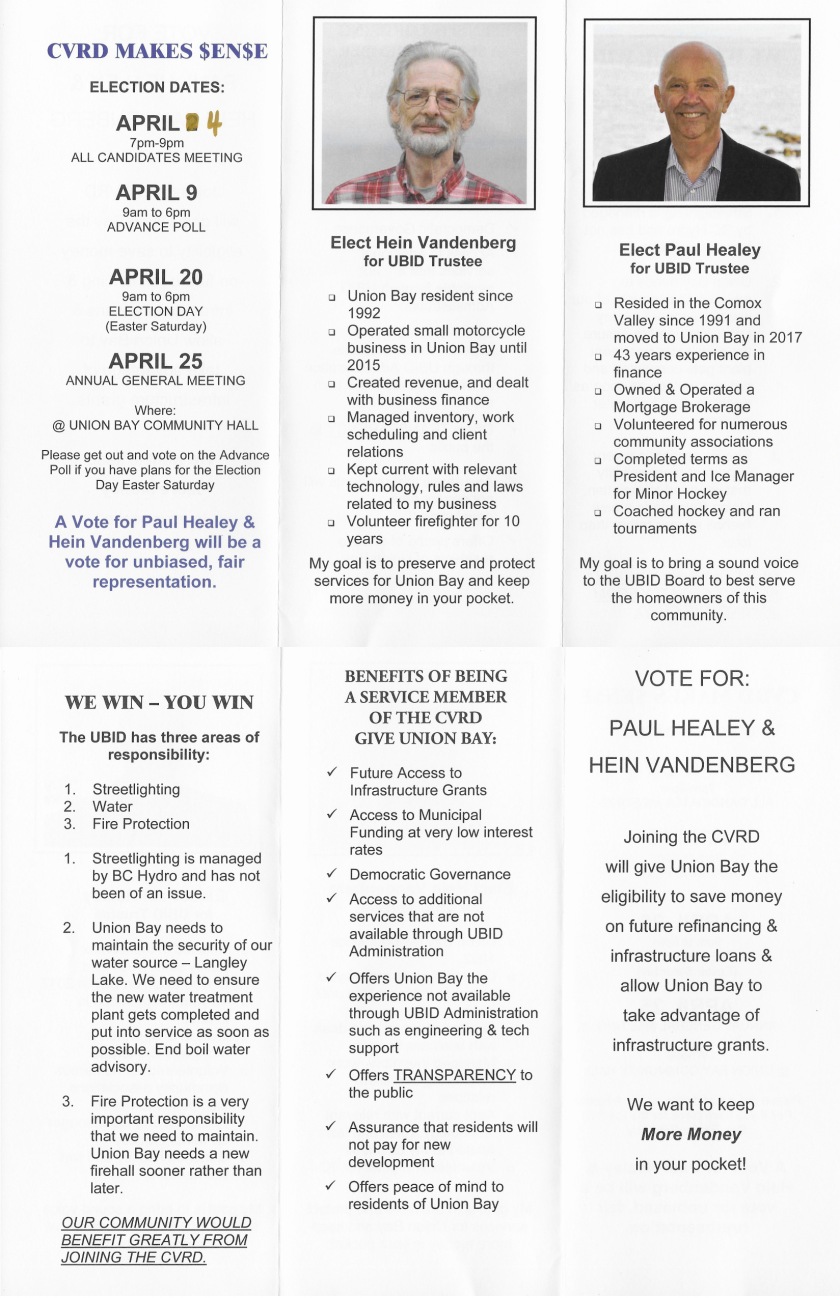 The board explains their positions on becoming a service area of the CVRD.

The following audio clip is from the Nov. 16, 2017 UBID board meeting where Trustee Kaljur puts forth a motion to send a letter to the CVRD requesting a study as to the pros and cons of joining the Regional District. The motion passed with the chair breaking the tie vote and stating there was “…no harm in writing a letter and getting information.”

The admin supposedly accidentally erased the 17 minutes of the motion and discussion. What I don’t understand is why he decided to exclude the 17 minutes completely in his minutes. The admin didn’t audio or video record the Jan. 2018 UBID meeting and yet managed to create the minutes. He did this by using my audio recording which means if he wanted you to read the discussion that took place at the Nov. 16, 2017 meeting, he would have used my audio of those missing 17 minutes.

From the person who claims RENA (research, evaluate, negotiate, act) never gets to “R” for “research”. Doesn’t understand what the letter to the CVRD would be? Thinks writing a letter is going to cause confusion. Doesn’t grasp the fact the procedure is for UBID to simply write a letter. What does this guy call ‘research’?

LIsten to the admin claim this motion was “sprung” on the board. WTF?

Then at the Dec. 14, 2018 meeting we learn the board brought forward a motion at the COW meeting the day before regarding sending the letter to the CVRD. Wouldn’t allow any discussion because it wasn’t on the agenda. Chair said will be on the next meetings agenda. Listen to the chair bumble around because he doesn’t understand the procedure.

This question from a landowner asking about the letter and the Chair claims there was no date on sending the letter. Funny, I don’t recall very many motions where a date to send is specified. Last one I remember was from when they tried to extend the expired water agreement with a motion that stated 3 business days.

Then out of the blue the guy who claims researching brings a motion forward in January 2018, to not send a letter. So the motion that was passed Nov. 16, 2017 has gone to motion purgatory never to be heard from again.

Now we have a municipality option added and yet there is no record of the board ever discussing becoming a municipality. I would guess there was a secret meeting where this was planned as the admin and the guy who claims to research (ha ha) are working together to prevent the landowners from acquiring the information.

The guy who doesn’t research gives reasons for not sending a letter to the CVRD and puts forth a motion “The Future State of the Union Bay Improvement District”:

At the 5:50 mark you will hear factual information on what the letter to the CVRD involves.