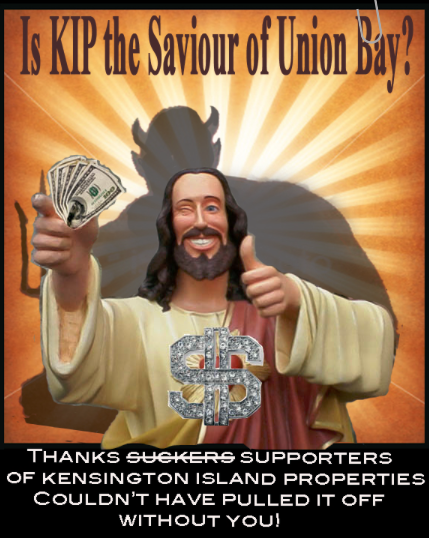 I hope Richard was not contacted by KIP spokesperson, David Godfrey on the developer’s behalf.

Union Bay – a community of marks willing to drink the kool aid served up by Kensington Island Properties, year after year.

Is this ‘favourable response’ in writing? This developer has said a hell of a lot in the last 20 years that turned out to be absolute bullshit.

Here’s what was posted. Richard: are you aware the developer cleared all those acres and extracted 3000 to 5000 tonnes without a permit? The developer still hasn’t applied for clearing that very property. What about those steep slopes? This is a developer that doesn’t care about you, or any of us because this developer would not have bothered applying at all if it hadn’t been for someone asking if there was a permit issued. Why did the developer only contact you when he has been hiding from the press?

Why can’t this developer ever face the community and also allow recording of the questions and answers? Gutless wonder.