The picture from The Goat shows how few Union Bay landowners show up for these meetings.  It’s a good indicator how educated the electorate is when it comes time to cast a ballot.  Based on attendance, I’d guess the majority of landowners are clueless.  They’re not attending the meetings and the info on the UBID website is sparse at best, so what are they basing their decision on?  Morons!

Another great article by Scott Strasser of the Comox Valley Record who attended the Jan. 18 meeting and published the following.  Thank you Scott for covering matters important to all Union Bay landowners.

Union Bay residents interested in learning if their local governing body will eventually convert over to the Comox Valley Regional District will have to wait a little longer.

At its November board meeting, UBID had passed a motion to send a letter to the CVRD requesting a study on the pros and cons of joining the regional district as a service area.

The issue did not come up at the board’s following meeting in December, however, to the chagrin of some gallery members who asked about the letter’s status.

But at its board meeting on Jan. 18, UBID approved a new motion to put aside sending that letter and assessing its governance until other priorities are met.

After the meeting, UBID chief administrative officer Gord Mason said Union Bay has other focuses on its plate right now, including building a water treatment plant and implementing a new billing system.

The improvement district is also involved with trying to prevent impending logging near the shores of Langley Lake — Union Bay’s drinking water source — this summer.

Mason said the new motion did not erase the previous one and that he had spoken with Ministry of Municipal Affairs representatives about the community’s possible options for the future.

“The ministry stands that the main priority for Union Bay is to provide clean, safe drinking water for the residents,” he said.

“When I have the opportunities… we’re going to look at the three options we talked about, which are staying as an improvement district, the possibility of becoming a municipality or merging with the regional district.

The debate surrounding governance in Union Bay is a longstanding issue. A petition to dissolve UBID and transfer its Letters Patent to the CVRD garnered more than 400 signatures in 2016.

UBID ultimately deemed the petition inadmissible due to some of the signees not being Union Bay landowners.

If Union Bay were to become a service area, such as the case in Royston or Black Creek, it would essentially dissolve UBID of its responsibilities and transfer its governance over to the CVRD.

One concern brought up at the Jan. 18 UBID meeting was that the study on conversion would cost the improvement district money or staff time.

Bruce Jolliffe, the CVRD’s Area A director (which includes Union Bay) says that would not be the case.

“Basically, they’d send a request to us for a study, the CVRD would take care of the rest, and we’d look after getting the funding,” said Jolliffe. “There are various funding options available to do those studies at no cost to UBID.”

Mason said he will be meeting with the CVRD this week to discuss possible options moving forward.

Big thank you also goes out to James Wood who attended the Jan. 18 meeting and published the following on The Goat Radio Station My Comox Valley Now. 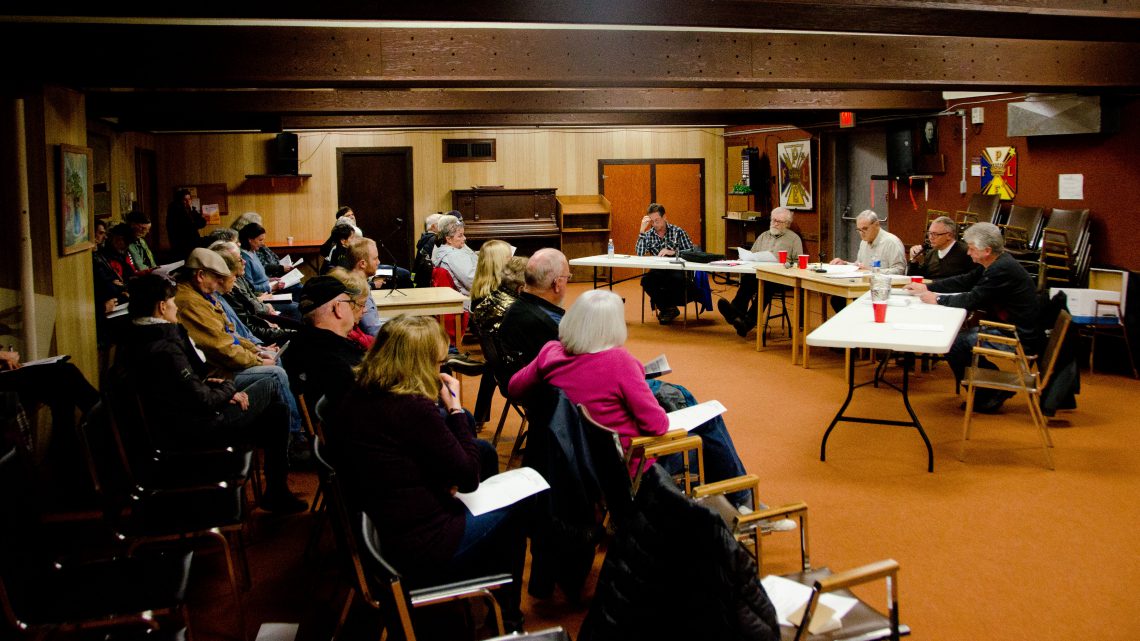 During the Jan. 18 meeting of the Union Bay Improvement District (UBID) trustee board, administrator Gordon Mason delivered a report to the assembled trustees about planned logging near Langley Lake, which serves as the source of drinking water for the residents of the district.

Earlier in 2017, the district had been informed that Island Timberlands was planning on conducting logging within 20 metres of the lake’s southwest shoreline. The company owns the land around the lake, while the UBID owns the actual body of water.

Trustees and residents have been publicly voicing opposition to the plan, and Mason mentioned discussions between Island Health and the UBID on the subject. During his report, he also stated the UBID had the support of K’ómoks First Nation in trying to get the logging stopped.

“We’re working as hard as we can to try and get a buffer zone of land around the lake, so that we can protect Langley Lake and the watershed,” said Mason, after the meeting concluded.

“We don’t want it (the logging) to happen. We would prefer that we can work with the government and be able to get some kind of a moratorium to begin to do a proper study of the impact of logging around Langley Lake.”

He stated the UNID is now working towards getting a meeting with Mid Island-Pacific Rim MLA Scott Fraser on the matter, and a meeting with Island Timberlands is also scheduled towards the end of the month.

He did not have the exact date to hand when asked.

According to information discussed at the meeting, the company plans to conduct their logging in the fall.