Just heard on the Goat radio station that ole KIP announced the development for Union Bay at the Kingfisher Resort this afternoon. Slick is trying out another name.  This time it’s Union Bay Estates.  Started out as Kensington Coastal Pointe; Kensington Coastal Point; U B Resorts and the The Union Bay Community – all fizzled and went nowhere. Another example of lipstick on a pig. From the Record:  https://www.comoxvalleyrecord.com/news/union-bay-estates-project-unveiled/

Sporting a new name, Kensington Union Bay Properties unveiled its long-awaited development plans for Union Bay at the Kingfisher Spa and Resort on March 1. The initiative — Union Bay Estates — is an 850-acre real estate and commercial development project proposed for the Union Bay area. “The project itself is going to be a game-changer for the community,” said Kensington vice-president Brian McMahon, who added the initiative is the largest development plan on Vancouver Island north of Victoria. “It’s going to be a game-changer for the Comox Valley as a whole.” The project, which has already been in the works for many years, promises 2,949 residential units featuring multi and single-family residences, as well as both retirement and affordable housing units. When ultimately completed, the multi-phase development could bring the population of Union Bay to between 7,500 and 9,000. Roughly 1,200 people live there currently. Read More: Kensington Island Properties provides $250,000 to homelessness support agencies Alongside the housing provisions, Kensington aims to bring several commercial and social amenities to Union Bay. At the launch event on Thursday, McMahon mentioned possible provisions for a pharmacy, a walk-in clinic, a movie theatre, hotels, and a bank. “We’ve had discussions with people who are interested in pursuing these things,” he said. The company is also donating parcels of land to the Union Bay Improvement District for its new water treatment plant and a fire hall. McMahon also said the company will commit land to School District 71 for a new school. “If we’ve got 2,949 new homes coming in, there’s going to be the need for a new school again,” he said. Development 20 years in the making Previously known as Kensington Island Properties, the company purchased more than 1,000 acres of land in Union Bay in the late 1990s, with the long-term goal of building a golf course, a marina walkway, a water filtration system and housing developments for the community. Read More: Kensington Island still in limbo But due to several political and regulatory hurdles over the years — as well as a few legal battles — none of the projects have yet been realized. McMahon says despite the rocky past, the “stars have aligned” this time around. He brought up revisions to the company’s Master Development Agreement with the Comox Valley Regional District, which were approved in December 2017. Read More: Revised master development agreement gives green light to Union Bay development “Everything is approved now. Before, we had ongoing hurdles we kept trying to overcome. Everything has improved,” he said. Next steps Before construction of any of the housing units can occur, Kensington will have to supply a wastewater treatment facility in order to service the projects. “We have to get the wastewater treatment plant up and running before we can sell any homes,” he said. “In order to do that, we need to get the pipes in the ground, we need to get roads built. We were meeting this morning talking about where the pipes are going to go.” McMahon said the company has applied to the Ministry of Environment to begin work on implementing a wastewater treatment facility. “That application is in the process,” he said. McMahon added the goal is to possibly begin construction on homes by summer 2019. “Before that, there will be roads, pipes put in the ground. There will be all the underground servicing going in,” he said.

Kensington/Union Bay Properties is hoping to make a subdivision application to the Ministry of Transportation and Highways and the Comox Valley Regional District within the next week or two for Phase I of the project now known as Union Bay Estates. The first phase will include 30 lots for single-family homes, and 9 of the homes are zoned to accommodate a carriage or laneway style of second dwelling. A three storey building is also planned to begin with the Phase 1 construction.This building will house the developer’s offices as well as offices for other tenants. 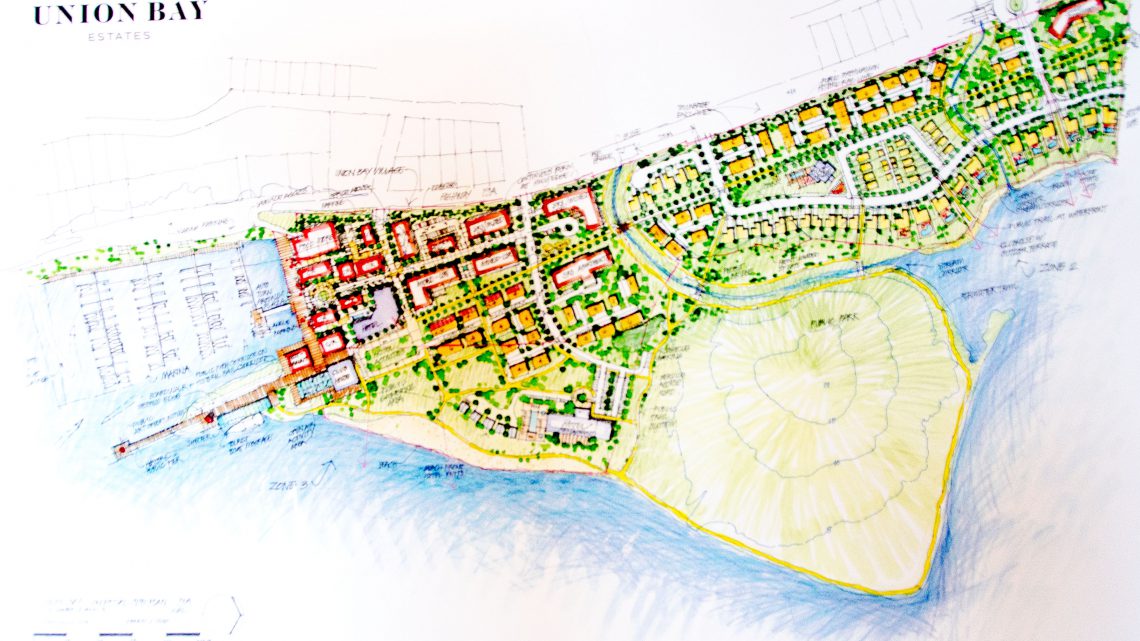 A photo of the draft community plan, presented on March 1, 2018. Photo by James Wood/98.9 The Goat/Vista Radio
UNION BAY, B.C- One of the Comox Valley’s oldest communities could be seeing huge changes in the near future. A long-running development project in the Union Bay area had it’s official launch on Thursday afternoon at the Kingfisher Resort. The project, run by a company formerly known as Kensington Island Properties (KIP), is planned to bring in a total of 2,949 homes in the lightly-populated area, under the name of “Union Bay Estates”. According to Brian McMahon, who’s been working on the project for the last 21 years, the name change was meant to show the development as part of the community. “Everyone has known us as KIP, or Kensington, or whatever,” said McMahon. “We’re Union Bay. That’s who we are. We’re part of Union Bay, and we want to be fulfilling that name, that our development is Union Bay.” The project will take up 346 acres in total, around the core of the current Union Bay community, with multiple phases. An overall population increase of around 7,500 to 9000 people is expected once the project is complete, along with an influx of new businesses. In news releases issued by the developer, a pair of new hotels are predicted, along with a movie theatre and walk-in clinics, among other improvements. The total timeframe of the project is set at around 10 to 15 years for completion. During the launch announcement, both Chief Nicole Rempel of the K’omoks First Nation and Peter Jacques, chair of the Union Bay Improvement District, spoke in positive terms about the project. “I have a 93-year-old girlfriend, and she is always on my case,” said Jacques, while speaking at the event.

Peter Jacques, chair of the Union Bay Improvement District, is pictured during the launch of Union Bay Estates at the Kingfisher Resort on March 1, 2018. Photo by James Wood/98.9 The Goat/Vista Radio

Brian McMahon speaks to reporters on March 1, 2018, outside the Kingfisher Resort. Photo by James Wood/98.9 The Goat/Vista Radio

“Union Bay used to have a population of 10,000 people,” said McMahon. “When the colliery was running, there were three hotels, there were banks, there were grocery stores, there was a department store, and it’s all gone. We’re looking to bring a lot of that back into the community.” McMahon also had more details on the planned remediation of the Union Bay coal hills, which are planned to be covered over by West Fraser Mills Ltd. According to him, the project will involve flattening the terrain to 50 feet across the hills, from a current elevation of 72 to 73 feet. Sand will then be used to cap the site, with an engineered membrane to go over top and be “heat-sealed”. Another layer of sand would be placed on top, along with a “growth medium”, and the site would be seeded with grass. No trees or anything with a taproot would be allowed on the site, as it could damage the membrane. “I suspect it’ll be green in the spring, green in the fall, and probably brown in the summertime,” said McMahon. “It’s not going to have any irrigation.” He believed it would eventually become a provincial park. “We’re going to enhance the walkability of the property, and to the park that’s its going to be,” said McMahon. While the developer is still working through processes with government bodies to begin work on the site, the first phase of construction will involve an upgrade to the Union Bay marina this summer, and the construction of office spaces for Union Bay Estates in the community. The first homes should be getting built in May or June of 2019, according to McMahon. “If all goes well,” he said.