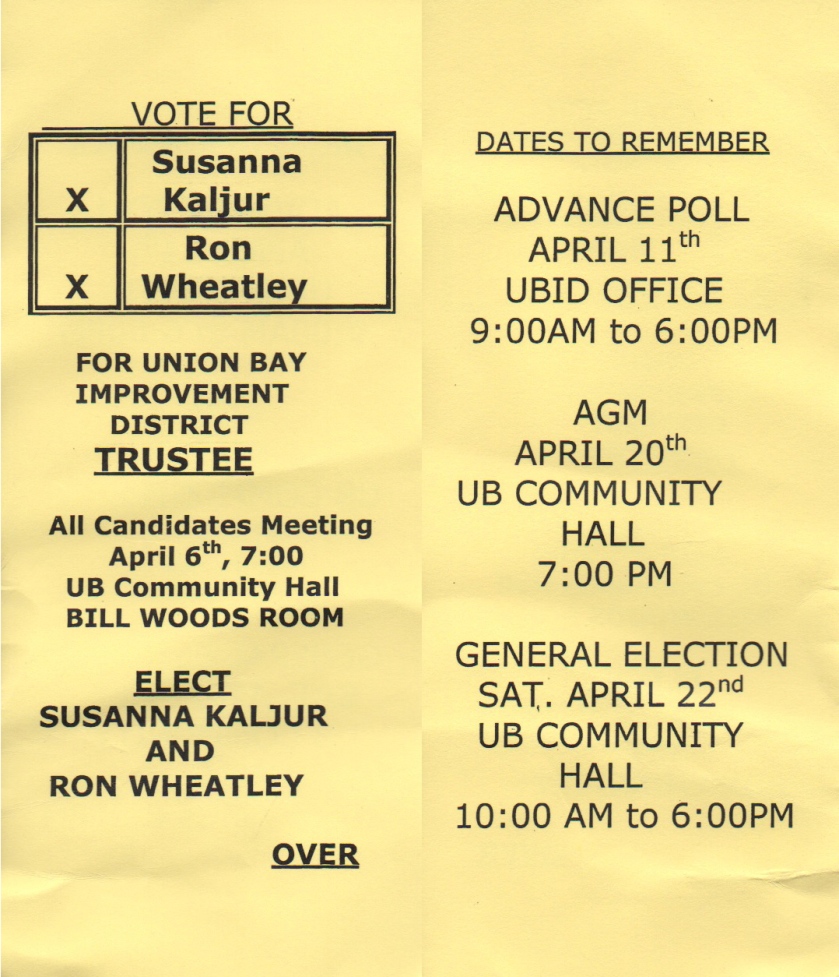 We can all relate to the Americans.  Trump promised everything and now that he’s in – he realizes things are more complicated.  Who knew things could be complicated?  You would think he would have had people around him educating him, preparing him for the role – No.  All those promises……everything was going to be easy…….  then reality sets in.

All the promises made by Kensington Island Properties aka 34083 Yukon Inc., and his Kool Aid drinkers David Godfrey, Peter Jacques, Glenn Loxam and the concerned citizens of Union Bay can take credit for the divide in dysfunctional Union Bay between those who think and those who blindly follow.

Peter Jacques and Glenn Loxam campaigned on one issue:  Approving an extension to the 2011 WIA Expired Agreement.

Now I don’t know if either of these two guys every bothered to determine if what they were promising was in fact legal or not, but this is what they promised to the 66% of the Union Bay landowners who signed the petition which Jacques and KIP spokesperson and landowner David Godfrey circulated in early 2015, and presented to Minister Peter Fassbender along with the VP of KIP, Brian McMahon.  Apparently, no one at the ministry bothered to determine the legal status of the expired 2011 WIA, although the Regional District and the Union Bay Improvement District had advised landowners the 2011 WIA had in fact expired as of Dec. 31, 2014.  The Union Bay Improvement District had received legal advice and opinion from UBID’s lawyer supporting their actions regarding the status of the agreement.

April 2016 Loxam and Jacques elected and have access to all documents at the UBID office regarding everything the Improvement District is involved or has been involved in.  Everything in order to make informed decisions.  An opportunity to educate themselves and adjust their opinions/beliefs once they had all the information.  This would include absolutely everything to do with Kensington Island Properties aka 34083 Yukon Inc., including the lawyer’s opinions.

Trustees Jacques and Loxam must explain to the landowners why they voted to resurrect the Expired 2011 WIA at their first official meeting after the Oct. 2016 by election.  Explain why they refused to change the wording of their Nov. 2016 motion to “request legal advice” rather than vote to “enact the force majeure clause” which put all landowners at financial risk exactly as the landowners of Naramata faced by the $5 Million lawsuit by a developer because they could not provide the water promised.  Approving 500 connections which we simply do not have.

Trustee Rick Bitten Apr. 6, 2017 tried an “alternative fact” by claiming the motion was in fact for legal advice, then when trustee Kaljur refreshed his memory he actually admits the motion was to enact the force majeure clause and then says : “So in the end result,  we did get a ruling from the lawyer.  Then in turn we sent a letter to the developer and told him that the agreement is no longer in place…”

The problem with Rick’s answer is that the agreement was no longer in place as of Dec. 31, 2014 – why didn’t he know that?  Why did he vote to resurrect that flawed 2011 Agreement?

Are you kidding me?  The end result?  No – it’s in spite of Bitten, Jacques and Loxam voting with the full knowledge they were promising water to a developer fully aware the Improvement District could not meet the terms set out in the Expired 2011 Water Infrastructure Agreement that Union Bay is no longer at financial risk thanks to UBID’s legal counsel.  These three fought tooth and nail and would not listen or consider any information provided to them by the Administrator of UBID or the two remaining trustees who requested they amend the motion to ask for advice.

Why won’t he just answer the question honestly?  Why did Jacques, Bitten and Loxam vote for an agreement which clearly put the landowners at financial risk?  They must have a reason.  Where were they getting their information and advice?  I simply refuse to accept Bitten’s parting remark: “So there’s the answer for the last time.”  This tactic won’t work for Loxam and it won’t work for Bitten.  Anyone can claim to be honest, have integrity, have credibility, be accountable, etc., but it’s just hot air if actions prove otherwise.

Jacques, Loxam and Bitten seemed to believe the previous board was taking the landowners in a direction they did not want to go.  Where are we going now that an entire year has been wasted by these Pro KIP supporters upsetting the community with their promises of something they simply could not deliver on and now want to take credit for the very plan put in place by the previous board which they claimed was so terrible and not listening to the landowners?  Only in screwed up Union Bay!

No progress has been made because of the 3 Pro KIP trustees believing they had to push through that dead agreement and now they’re claiming things aren’t proceeding due to another trustee!  The very trustee who expressed such shock at Bitten, Jacques and Loxam’s motion to resurrect the expired 2011 WIA.  Bizarre Union Bay.

Basically, we have three trustees who really shouldn’t be on the board as they were elected by willfully ignorant people who believed the misinformation promised by those who didn’t have a clue what they were talking about.  It appears they are no smarter now than they were when they decided a terribly flawed agreement which had expired almost 2 years ago  could be extended.

If you have bothered to attend the meetings or watch the videos you have witnessed the problems with these three trustees understanding motions they are voting on, their fear of a committee to examine the pros and cons of joining the RD, their misinformation which they refuse to correct when an error is brought to their attention, their questionable remarks they claim came from the ministry.

The goal of Jacques, Bitten and Loxam was to ram through the expired agreement.  They had no other plan – nothing.  Bitten stated “What is the alternative?”.  Is this someone with a vision?  Now they sit and have to be brought kicking and screaming forced to follow something they refused to accept and there is no one to train them.  They created chaos in Union Bay and are prancing around like they’re heroes.