The Fire Hall land suffered more shrinkage tonight.  It’s gone from 4 acres to 3 acres and now it’s 2.2 acres.  KIP has 2 years to turn this piece of land over to UBID.

The gong show disease reared it’s ugly head again tonight when Freedom of Information requests were discussed.  To sit and listen to someone just completely bullshit their way expecting everyone to swallow the crap and then insist that UBID’s bylaws could over rule the Freedom of Information just leaves me shaking my head.  Doesn’t exactly inspire confidence when you hear flaky alternative facts.  This is the UBID bylaw they believe trumps Freedom of Information legislation.  http://union-bay.ca/wp-content/uploads/2017/04/Bylaw-No.-223.pdf

The Admin charged a landowner for 4 hours of work at $50./hr to retrieve in camera minutes from June and July 2017.  What the hell could have taken him 4 hours?  Plus, he charged the landowner after the fact.  4 hours?????  Plus, you can’t charge anyone for the first 3 hours according to the FOI fees below.

It’s history repeating itself.  Pre April 2011, the board thought if they voted on something – that made it legal.  Now these brainiacs believe they can make up bylaws that will over ride Federal and Provincial legislation.

According to the knowitall the following stipulations don’t apply to Union Bay.  Another example of the lack of training with this board and admin.  They will only learn by stumbling/bumbling around doing a half assed job and complaining about it.  You’d think they didn’t know how to read.

Even after they are informed the Administrator does not have to be the ‘Head’ and a trustee offers to be the ‘Head’ they continue to use the excuse they can’t respond to FOI’s unless they can charge per bylaw 223 insisting it takes time away from the Admin.  Another example of their fear information will be released which exposes what has transpired.

75  (1) The head of a public body may require an applicant who makes a request under section 5 to pay to the public body fees for the following services:

(a) locating, retrieving and producing the record;

(b) preparing the record for disclosure;

(c) shipping and handling the record;

(d) providing a copy of the record.

(a) the first 3 hours spent locating and retrieving a record, or

(b) time spent severing information from a record.

(3) Subsection (1) does not apply to a request for the applicant’s own personal information.

(4) If an applicant is required to pay a fee for services under subsection (1), the head of the public body

(a) must give the applicant a written estimate of the total fee before providing the service, and

(b) may require the applicant to pay a deposit in the amount set by the head of the public body.

(5) If the head of a public body receives an applicant’s written request to be excused from paying all or part of the fees for services, the head may excuse the applicant if, in the head’s opinion,

(a) the applicant cannot afford the payment or for any other reason it is fair to excuse payment, or

(b) the record relates to a matter of public interest, including the environment or public health or safety.

(5.1) The head of a public body must respond under subsection (5) in writing and within 20 days after receiving the request.

When I asked the question as to who was the “Head” appointed by UBID to handle FOI requests – 3 trustees and the Admin didn’t have a clue what I was talking about.  It proves these people have not bothered reading or educating themselves on their duties and responsibilities.  Two of the trustees have been in the position for over a year and are just as clueless as the day they were elected.  The following is page 55 from the Improvement District Manual.  http://www.cscd.gov.bc.ca/lgd/gov_structure/library/improvement_district_manual.pdf 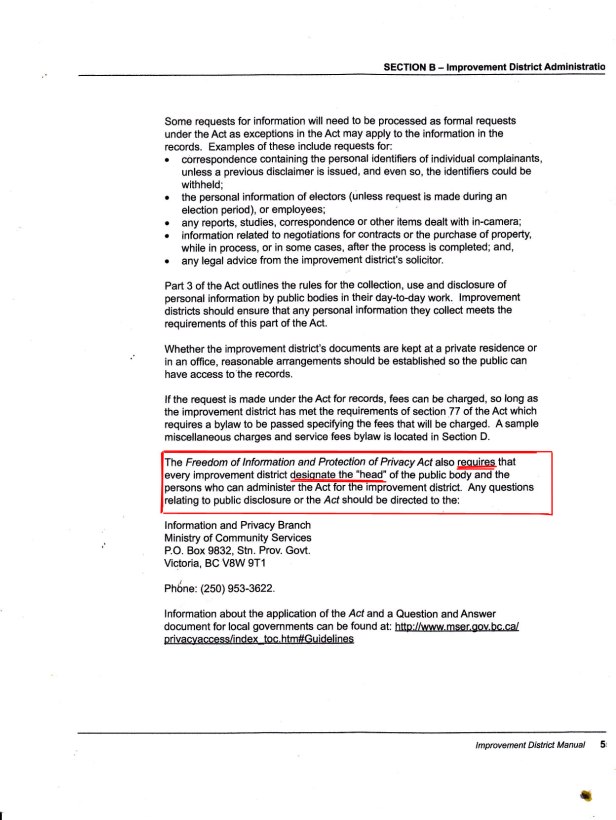 Talking about new families moving in with kids and jobs being available.  In what universe is he living?   Again, does this person realize KIP can’t build anything until he has a sewage treatment facility?  Even McMahon stated you can’t have one without the other – water and sewage.  No septic fields allowed on any of the KIP land.

The strange happenings with Bylaw 264.  For those of you who don’t know about this bylaw, it was passed at the March 2016 UBID meeting and then the Ministry sent it back with some minor changes and provided an example.  The board complied and the Bylaw was reconsidered and approved at the June 2016 UBID meeting.  Jacques and Loxam were against this bylaw even before they were elected because they said it discouraged development due to the MMIC Platinum standard and the 125% surety.  It has been explained to them many times that there no longer is a Gold Standard and it is now Platinum.  They both objected to the 125% surety because they claimed Crown Isle didn’t require that amount.

My only guess is that in that old bylaw KIP wanted (Bylaw 170 and now has thanks to his boys) there is something he can use to his advantage.  Bylaw 264 was 2 years of work by the previous Administrator Kevin Douville consolidating and updating the bylaw.  Now those in control don’t know why they oppose the bylaw – just that they do and I have a good idea who is instructing their every move.  They wouldn’t even consider setting it aside and working on it in the future – they insisted on killing it.

And to top it all off, they video recorded the meeting but when I asked if they were putting it on Youtube the Administrator could not answer.  He has to speak to the webmaster and they are going to figure something out.  Asked when the video would be up and no time was given.  Again, these guys don’t want you to know what’s going on.

Didn’t I say they couldn’t put it on Youtube if they claim copyright protection?  It’s only taken them 5 months to clue in.

They claim they are too busy for FOI requests and can’t answer correspondence and yet they have all the time in the world screwing around with the video recording, spending money on a Go Pro camera, figuring out where they are going to post it and learning how to post it.

For these tools to learn anything they have to be force fed because they assume they don’t need to know anything other than their opinions.

Luckily, a landowner recorded the audio.