Who hired this guy?  Listen to the way he speaks to Trustees asking him questions at a public meeting.  He’s under the impression this is grandstanding and not the place for these types of questions.

This is the attitude of the majority of this board – they want to make decisions out of the public eye.  That’s why they are planning on Executive Meetings – they can’t face public scrutiny.

This is Trustee Kaljur questioning the discrepancy between the figures published and posted at the Open Houses and those recently posted.  The Admin turns to the Chair to shut down Kaljur and the Chair states whether it was on the poster boards or not is rather immaterial.  The Admin argues that the figures are similar.  No they are not.  One was for $2 million over 20 years at 3.34% and the new figures increase the amount and the loan is over 25 years at 3.45%.

The Admin also falsely claims the information was provided in the Landowners update and that the figures are correct.  Bullshit – there were NO figures provided in the March Landowners Update.  https://drive.google.com/file/d/1VsltQzz9-VCV5dwe9kADefpz_inLFQ7i/view

This is Trustee Elliott asking how much of the parcel taxes are pegged to repay the loan for the water treatment facility.  You’ll notice the figures provided regarding the borrowing has been listed by loan amount and then the parcel tax amount required to support the borrowing costs.

The following post proves the Admin was not being honest when he claimed the new figures were put up when the incorrect ones were removed.  Bullshit.  The figures were taken down Mar. 3 and the new ones weren’t posted until Mar. 12, 2018:  https://allthingsunionbay.com/2018/03/23/union-bay-improvement-district-admins-alternative-facts/ 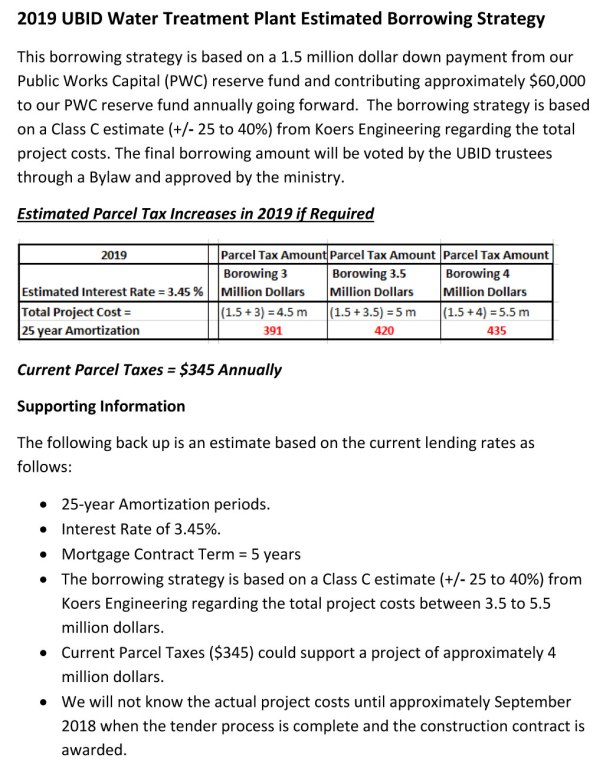 These are the figures posted on the UBID website and on the pasteboards at the 2 Open Houses. 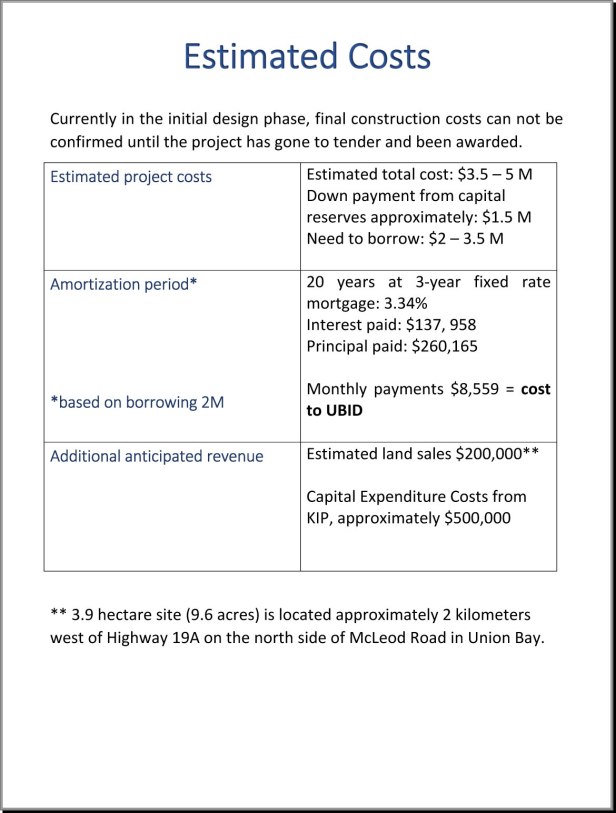 Here’s  a new set of figures posted today on the UBID website.  It appears as though no thought has been given to the upcoming increases landowners will be facing.  What about the cost of a new fire hall, fire trucks, etc.  Where will those funds come from if this amount of the parcel taxes is pegged/required for this one project?