June 9, 2017 Rodney Bitten https://www.facebook.com/profile.php?id=1758623988  calls police and provides a shitload of ‘alternative facts’ to Const. Palmer who arrests me and charges me with assault.  Condition of my undertaking is to have no contact with Rodney Bitten.  No problem – never wanted anything to do with him in the first place.

The pic below shows the wood boards Bitten put up and attached to my garage after he had me charged with assault.  Quite the story he told the police June 9, 2017 about how he saw the post on the ground in the morning and his wife was upset and crying.  He supposedly went to work and was so upset, and I love this claim:  Rodney Bitten claims the police and the bylaw officer told him to go home and finish his fence – bullshit! 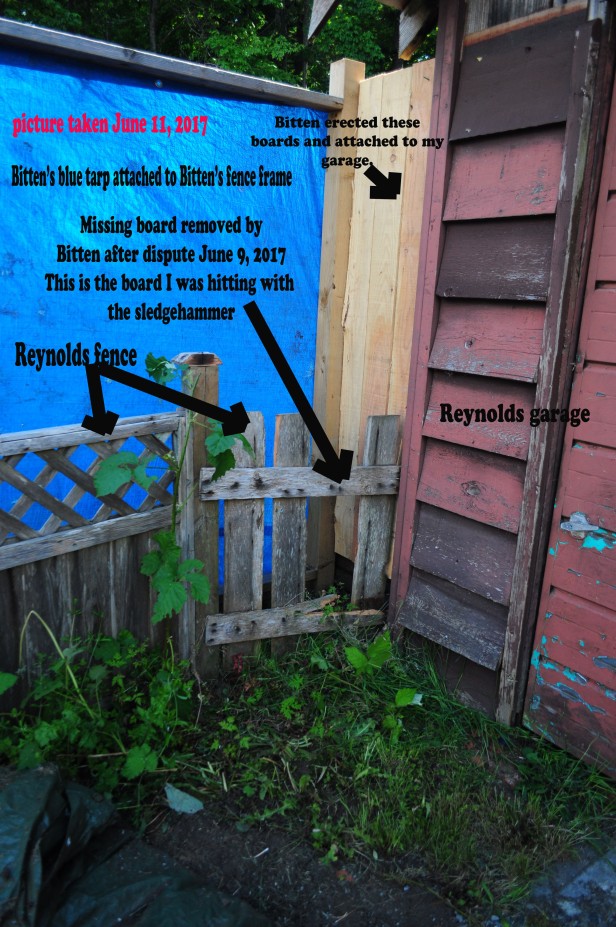 Court date is scheduled for the beginning of August 2017 and the day before court I receive a phone call from the RCMP stating the charge has been withdrawn.  No explanation.

Although I’m not under any conditions, I do not speak or contact Rodney Bitten.  Then at the end of Sept. 2017 I receive a phone call from Const. Palmer advising me Rodney Bitten has made an application for a peace bond as he fears physical injury.  Another undertaking that I am not to have contact with what’s his name – no problem.  I didn’t have to attend court Oct. 5, 2017 and Oct. 19, 2017 as Jason Gratl arranged for an agent to act on his behalf.

Then shortly after noon on Oct. 19, 2017, two police cars arrive and a male and female officer advise me that I have breached my undertaking by supposedly calling Rodney Bitten a hillbilly across the fence.  This is a completely false story made up by Rodney Bitten who was pissed that I didn’t have to attend court.  I’ll spare you my thoughts on what kind of person would file a false police report.

Now there is a charge of breaching my undertaking and the peace bond application.  Another undertaking not to have contact with what’s his name.  So how do you prove you didn’t do something when you live alone?  Since Rodney Bitten pulled this once, there was no reason to think he wouldn’t do it again.  I love gadgets so the answer was to wear an audio device and record every minute of my life when I was at home alone and would have the proof to dispute any further false police reports by Rodney Bitten.  Starting Oct. 19, 2017 I recorded everything so if you spoke to me – you were recorded.

At this point, Rodney Bitten introduces the Union Bay Improvement District into the works by claiming the dispute over the garden against my garage escalated due to his father (daddy Rick Bitten) being elected.  March 2016 daddy Bitten was not a trustee, in fact, he wasn’t a trustee until Oct. 2016.

Arranged to have my property surveyed Oct. 23, 2017 and surprise, surprise, Rodney Bitten’s fence frame panels are directly on the property line in spite of the fact he told the Bylaw Officer at the CVRD that his new fence frame was well within his property to maintain ownership – see – more bullshit.  Rodney Bitten knew where the property line was in March 2016 by his own string line and yet he insisted the 18 inches to the right of his string line was his property.  Why?

On Oct. 30, 2017, Jason Gratl arranged for a process server for the lawsuit to be served on Rodney and Megan Bitten  https://allthingsunionbay.com/2017/10/30/two-words-for-those-who-think-im-alone-and-a-easy-target-jason-gratl/.  Now, you will notice in the apology letter Rodney Bitten states as of Oct. 30, 2017, they have a clearer understanding of the property boundaries.  What you don’t know is that Rodney Bitten tried to have me arrested Oct. 30, 2017, because he claimed being served with the legal documents was ‘contact’ which he claimed breached my undertaking.  When that didn’t work he then made up a brand new lie claiming he came home and noticed a survey marker and realized his garden might be on my property and that he went out back and was removing the garden when he looked up and saw me on my deck video recording him and laughing at him.

Remember that audio device I’m wearing?  Well, I can prove exactly what I was doing during that time including phone calls with the process server and neighbours.  Bittens are lucky we didn’t get to Examinations for Discovery – all the lies would have been exposed.

Lots of lies in their response to the lawsuit.  Rodney Bitten sure has changed his tune from this:  https://allthingsunionbay.com/2017/11/15/mary-reynolds-vs-rodney-bitten-and-meghan-bitten-response-filed-nov-15-2017/

Rodney Bitten and Megan Bitten’s lawyer advises that the Bitten’s will remove their garden from my property and it is agreed to take place Nov. 15, 2017.  So now we know it is my property.  True to form, Bitten doesn’t wait until Nov. 15, 2017, and when I return from town Nov. 10, can see where they have removed some of the ties and soil.  When I post that rats must have been at my garage – Bitten’s are upset – but completely ignore that they knew they were trespassing at this point.

Nov. 15, 2017 rolls around and Rodney Bitten and Freda (see pic below) from down the street remove most of the garden but leave a foot of soil and the white material against my garage because they know if they remove it – the damage would be visible.  Freda is the name I gave the guy who called me a ‘c**t’.

The slimy, cowardly Union Bay Improvement District saw an opportunity to prevent me from attending the monthly meetings so Chair Peter Jacques, without the knowledge of the full board sent me a letter which he copied to the RCMP and Crown Counsel in an attempt to have me arrested for breaching my undertaking because Rick Bitten – daddy Bitten to Rodney Bitten – is a trustee. 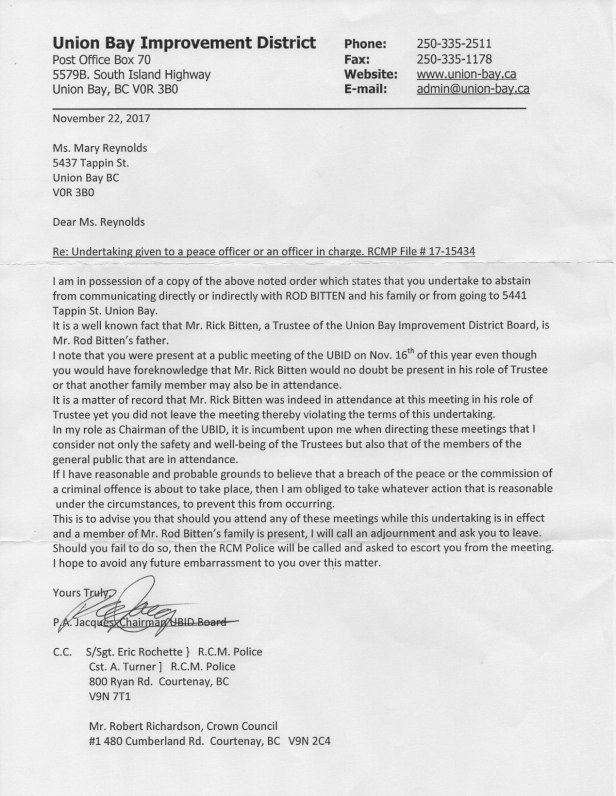 Jason Gratl appeared with me in court Dec. 14, 2017 (same day as the Union Bay Improvement District monthly meeting) to clarify my undertaking to ensure I can attend the UBID meetings.  Well, what a surprise.  The Crown Counsel stated in court that it was never the Crown’s intention to prevent me from attending meetings.  The slimy, secretive, cowardly Union Bay Improvement District took this action without the knowledge of Trustees Kaljur and Elliott.

Do Peter Jacques, Rick Bitten, and Glen Loxam know the Union Bay Improvement District tried to shut me up before with a lawsuit and ended up paying me $15,000. on top of tens of thousands for their own legal fees?  Again, a victory thanks to Jason Gratl. 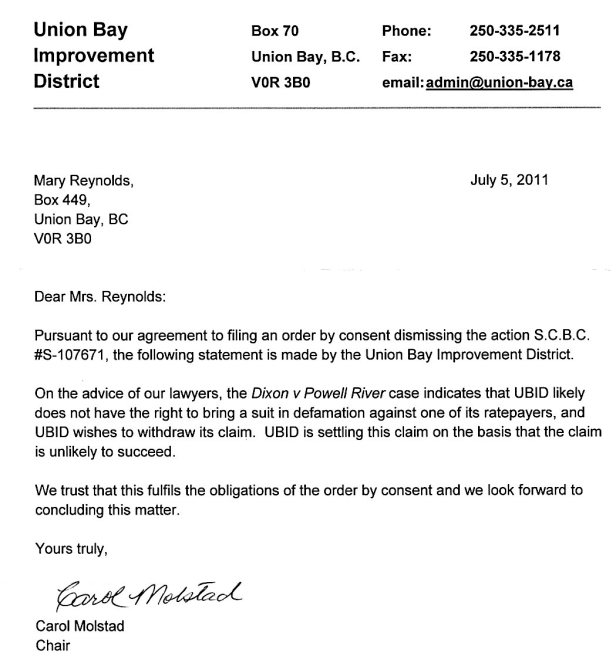 During the Dec. 14, 2017, court appearance Jason Gratl had requested disclosure documents from the Crown.  The judge gave the Crown a month to provide the requested documents.  Correspondence back and forth between Jason and the Crown without much success.

Bitten’s put up this funny sign – LOVE THY NEIGHBORS. 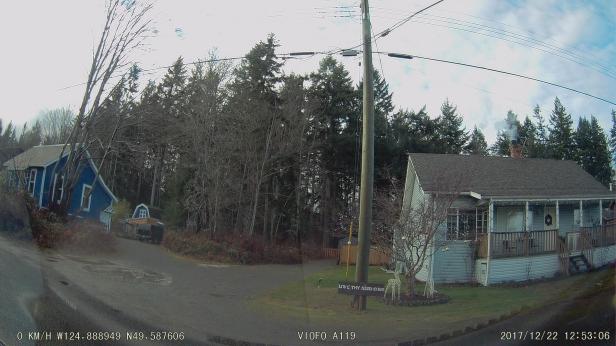 Jason arranges another court date  March 28, 2018 to request the court to review the disclosure documents the Crown is not providing.   Jason calls me March 27, 2018 and advises the Crown has stayed all the proceedings.

That leaves Examinations for Discovery scheduled for July 2018.  This is the meat.  This is where I thoroughly enjoy watching Jason.  When I met Jason years ago and watched him in Examinations for Discovery I couldn’t imagine anyone getting away with a lie.  The Bittens have gotten off easy with the money and an apology because the numerous lies and false police reports would have all been exposed.

The value to me is the apology letter.  So after all the false claims about me – now what does Rodney Bitten say about Mary Reynolds?

We regret any suggestion that Ms. Reynolds is a threat to our safety; we recognize that she is not.