At the March meeting hosted by Kensington Island Properties the VP told those gathered that KIP was unable to proceed until the coal hill remediation was  agreed upon and that the approval was only given in October of 2014.

If true, and KIP was then given the go ahead in the October of 2014, why does an email from May 2015 state there still is no progress regarding the coal hill remediation?  See the link below from a previous post.

What proof do the KIP supporting candidates have that this developer is actually in a position to follow through on any agreement?  What is holding up the coal hill remediation?

This developer must have sewer and water before proceeding.  We are going to be in a mess if we have ignorant Trustees negotiating a deal simply believing the developer is ready to proceed and then nothing happens for months.  We have until 2018 to meet VIHA’s mandated standards.

Remember, this is a developer who stated:

If you’ve been paying attention to the statements by this developer and the promises of starting different aspects of this development know by now nothing ever develops.  Nothing is ever started.  No sewage, no golf course, no water treatment system.  No one has ever seen any plans for a temporary treatment facility.  Nothing submitted to UBID in anticipation of starting the project.

Waited until October 2014 to contact UBID and never made a formal request for an extension – just informed the Administrator.  No plans submitted – nothing.  Why has this developer refused to comply with the conditions any developer must adhere to when seeking water from the Improvement District?

There is never any forward movement with this development because the developer disappears for months and his word cannot be trusted.  Too many versions of the water treatment facility.  Started off in July 2011 with the developer claiming the components were sitting in Langley waiting for assembly and now has morphed into “the money is in trust with my lawyer”.  How could the components every have been waiting for assembly when he never submitted any plans?  UBID needs to approve any plans.

This developer is claiming he has still 3 1/2 years on the expired agreement.  Claims right from the date he signed the now expired 2011 Water Infrastructure Agreement.  See below. 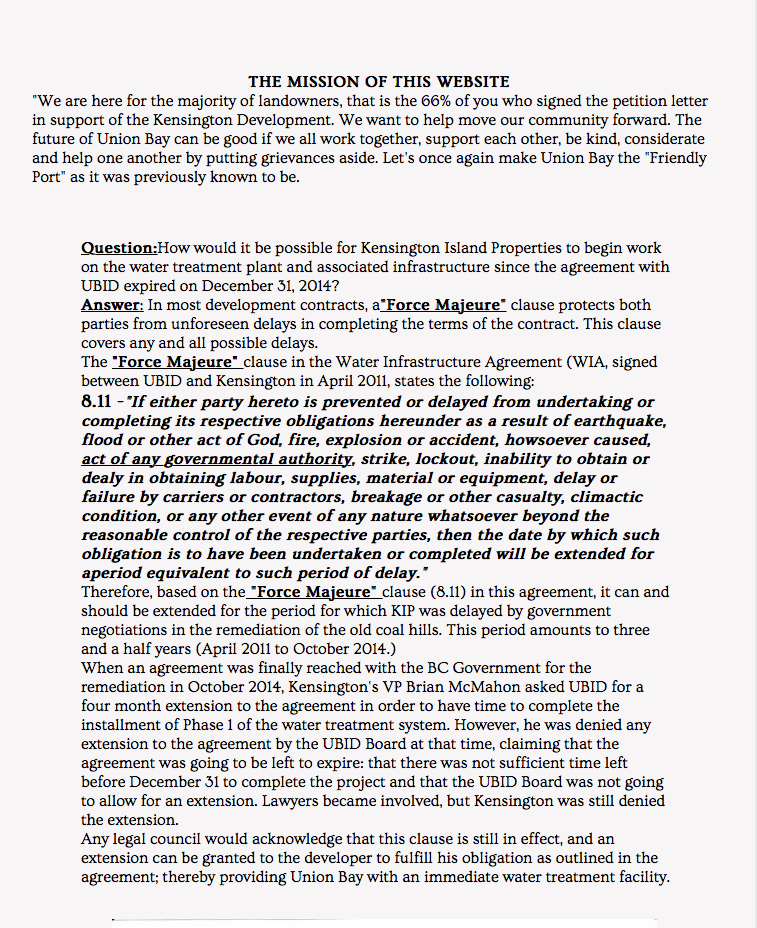 Why did this developer pit landowner against landowner in this water dispute if he had a case?  Why didn’t he just go to court and enforce the agreement if he had such a great case?